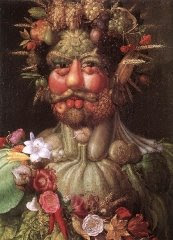 Every now and then I work in the public school system, and am always shocked at how alarmingly crappy the average diet of most of the attendees is, and you can't just blame it on the school.

Last Thursday I was at an elementary school. The snacks most of these kids bring in from home are non food items, usually boxes, pouches or bags teeming with chemicals, dyes and sugar. In a classroom of 25 first graders one had a bag of grapes and one had an apple but the rest had pure junk food. And then there was a lot of trash afterwards because it was all packaged.

I witnessed one kid who had a bag of Doritos for a snack at 10:00. For lunch, a couple of hours later, that same kid ate another bag of Doritos, a sandwich that consisted of 2 pieces of cinnamon bread with nothing in between them, a container of grape juice, and a container of pudding. I was told that he eats that same lunch EVERY DAY.

They did have a salad bar in the cafeteria, but I did not see one salad made. It was hot dog day so most of the kids had a hot dog on a white bun, juice, pudding and an ice cream bar.

I see this over and over, and whenever I mention my concern to teachers and other staff, the answer is the same and I am dead serious. “It’s all they will eat.”

There is such a simple solution to this insanity. If the choices were salad bar, some fruit, water, homemade soup, etc then THAT is all they would eat………!

btw, the photo above is a painting by Giuseppe Arcimboldo who was born in Milan in 1527 He is famous for his portraits of human heads made up of vegetables, fruits, tree roots, books or other elements.
http://www.artypantz.blogspot.com/
Posted by Artist Victoria O'Neill at Sunday, January 25, 2009

That is so sad. I may not make the best choices but my kids are taught what is good to eat and I still prepare my daughter's lunch for school and she has a decent sandwich, grapes and water. Duh, no wonder our nation is fat.

so nice to hear that some parents are paying attention out there. good for you!

yes, I agree! All those quick snack items are such a waste of money too.

i never had a problem with my child eating well until he went to public school...amongst other things! after that he homeschooled for 2.5 yrs and now attends a very small school 3 days a week and homeschools 2 and he is now cooking and making heathy choices for himself...and loves vegetables! doritos are a treat, not food...but the pressure to assimilate is strong, resistance is futile for some families....and i agree, what a waste of money and resources! all that packaging! give me real food and a wax paper bag with a thermos anyday!

and then they wonder why the kids behave badly.....