Making an Ironing Board Cover 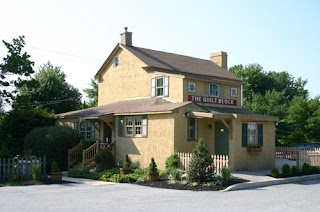 Today I went to a class at The Quilt Block to learn how to make a quilted ironing board cover. You were supposed to bring your old one to use as a pattern. That was pretty embarrasing because mine looked like an old undergarment or something........I knew it was ugly but never just how so until it was off the board and in my hands. Ironing is such a big part of sewing and I really wanted a beautiful cover so out went the old and in came the new!

The class was such a wonderful learning experience. My teacher was so kind and patient and I received undivided attention since as it turned out I was the only person who actually showed up to the class! It was a leisurely afternoon, pretty quiet in the store, and so we got to know each other a bit in the process. 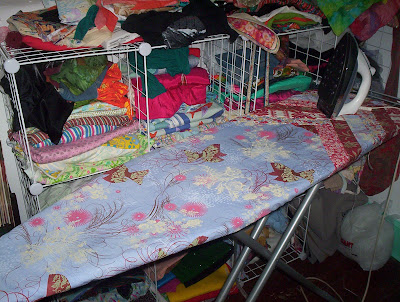 I learned so much. and hard to believe it, but actually broke down and purchased a measuring instrument! It's a jumbo see through heavy plastic ruler measuring 6" x 24" that has all kinds of lines, curves, inches, etc all over it. I can use it for art stuff too. I also got a rotary cutter which looks like a pizza cutter but it's for fabric. Up until today if I needed to cut straight I just made a nick and tore the fabric........apparently that is a NO NO and those kind of cutting days are over. After using the scissors in the store, by comparison mine felt like I was cutting with a pair of butter knives strapped together. So I got some super sharp scissors too. 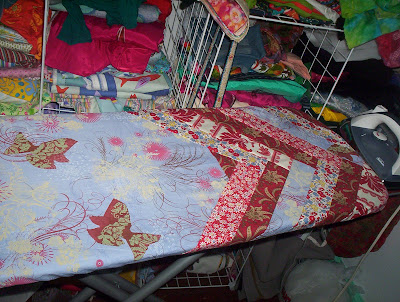 The Quilt Block has been in business for two years now but it's a fairly recent happy discovery for me. A few months ago while semi lost in my car (a common occurance), I spied the shop tucked behind a bank, not too far from home. Being a fabric junkie I slammed on the breaks, hopped out, ran in, and now look for any excuse to go there.
I just happened to have a WrapADoodle with me that day, and took it in to show and tell, knowing that all women who sew love to see each other's work. The proprietors of the store were both there that day and they are just the nicest people ever. While I gushed over their store, they encouraged me to make a pattern for the WrapADoodle to sell in their store and in other stores.....so I put that thought into my pipe and have been smoking it ever since.
I love this store so much. It's in an old house with wide plank wooden floors. It's full of neatly and creatively arranged fabric, quilts, patterns, samples, etc. The atmosphere is so clean and inviting. I've been in and out of there a few times. Each time somebody there encourages me to make patterns and each time the thought goes into my pipe. I met some very interesting quilters in there a week or so ago and will post about them sooner than later.
In the meantime, now that I have all the proper tools, I'm going to take another class there one day. I bought an interesting book on the way out the door about making floorcloths with fabric and that will probably be the next project. Painted floorcloths are beautiful, but the fabric ones they have on the floor as samples in the store are stunningly brilliant.
Almost done with The Golden Rule coloring book. It is unbelievable how much time and energy is going into such a simple little endeavor, but hopefully it will be worth it in the long run. I need to finish it so it can be moved out of my mind while I get muchos WrapADoodles ready for an exhibit at the La Leche League Conference coming up in mid July!

how pretty....i hate ironing anything,seems like such a chore no matter what it's for, but a cover like this one i'd go look for something to iron!!

What a great cover you made. So pretty. LOL... I'm with Ann. If I had something like that I might actual iron.