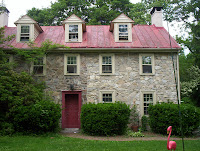 Back in those days, not so long ago, when my studio was a mess I would walk in and walk right back out because the chaos made me even more crazy than usual, but now that I've moved into two organized spaces on the third floor, I could stay up here forever.........I've been holed up in these tippy top studios for days now (see top windows in the picture above). For awhile there it was hell as in inferno, but my dear husband put an air conditioner in and now it's heaven. By the way, that pink thing in the lower right hand corner is a pink flamingo that my daughter found in the trash.

I often miss events, parties, meetings, etc. Sorry about that but I have to be here now. I did drag myself out on Thursday to make books with kids of people who came to a prayer vigil for the imprisoned Baha'is in Iran. (Click on Baha'i in blog labels to learn more about this dire situation.)

Being in and working in my own space is the best. I've always chosen to live somewhere beautiful and surrounded by nature even if it means renting instead of buying. I've also been fortunate to be able to choose time over money, so never had the need to go on vacation or escape from my life.
I love so many people, including those to be met, but happiness abounds in solitude. Ideas take hold, squeeze hard, and won't let go until they are materialized. That is just the way it is. I have to SEE my idea in front of my eyes right now. And the ideas keep coming, like a hose on full blast.
There is so much tension in the world between different kinds of people, and every time I see evidence of it I want to do something to help. The world's problems boil down to one pervasive concept. Somebody thinks they are better than someone else. Their country is better, or their religion, or the way they eat, or raise their kids, etc, etc, etc. This attitude is truly the root of all evil in the world. Just think about it.
No one person is qualified to hold themselves over another person. The fundamental problem of presumed superiority is a sign of spiritual immaturity, and ignorance of the spiritual and scientific fact that we are all One. And for those who believe in God, that means One God, the Same God for everyone. I hope never to see a bumper sticker that says My God Beat up Your God.......but that is kind of what is going on these days.....
In light of all this, in my ongoing efforts to bring people together through the arts, I'm in the process of creating an accordion folded coloring book on the theme of The Golden Rule, using quotes from Traditional African Religion, Hinduism, The Baha'i Faith, Christianity, Judaism, Confucism, Islam and Native American Wisdom. It's such a simple concept to treat people the way you want to be treated. Putting this into practice is probably the very best thing we all can do to help make a better world. That and working on improving our own conduct and character and aspiring to be the kind of person we want others to be.
It's very fun to be drawing again. I'm integrating images of birds, butterflies, flowers and a couple of people in and among the writings. The whole thing will be printed on an 11 x 17 paper, folded and cut, then folded again into the accordion shape. I'll punch holes and tie some gold ribbon or threads on either end of the accordion, then place them in cellophane envelopes and start offering them in various venues.
I'm almost done with it, but just when it seems to be finished, it's not. So it looks like I'll be here a little while longer.

Enjoy your time creating and working. Look forward to the results when you come out! It is painful and sad to watch people fight with each other, doesn't make alot of sense to me - some of it anyway. Guess that's what we get for Eve and the apple....love your house, looks like a country home in England.

you have said it all..and far more eloquently than i could!!

thanks for visiting me with such warm wishes. i would've loved to get a wrap a doodle for my new granddaughter who is now 5 months old, if only i had known. they look wonderful.

Well said! I am glad you are creating again! You have such a charming house! I love it!