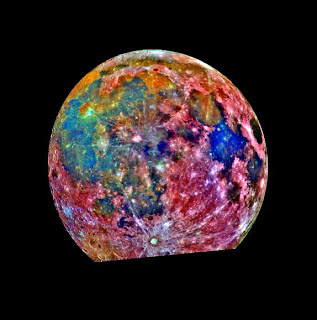 This false-color photograph is a composite of 15 images of the Moon taken through three color filters by Galileo's solid-state imaging system during the spacecraft's passage through the Earth-Moon system on December 8, 1992.

So, our Christmas tree was pretty but the only things shed when it was undecorated and dragged outside were all the dead pine needles as it squeezed through the front door on it's way out. Driving around this morning I noticed Christmas trees in every yard, lying on their sides, done, waiting for the trash men to come pick them up.

Christmas, as it has come to be, bores the holy hell out of me. I have an authority problem, so not a big fan of any day that tells me when to buy presents for people.

Christmas is another group routine and routine means without thinking. As far as celebrating the birth of Jesus is concerned, ho ho ho, nobody even knows where Jesus was born, let alone when.

Visually speaking I’m sick of walking into stores and smelling sickeningly sweet scents of fake cinnamon and egg nog burning in candles. Holiday decorations are just plain ugly these days, weird, gross to the touch, some bordering on scary and, on close inspection, mostly mass produced in China, where religion is frowned upon to say the least.

I try to avoid eating wheat and sugar and there it is, in my face for days on end. Gingerbread people, houses, cookies and candy all ramming themselves down my throat at every single opportunity.

I don’t get the live tree vs. the artificial tree debate either. A tree becomes dead the moment after you chop it down! And instead of a “live” wreath how about dragging a "live" reindeer out of the woods and strapping it to the roof of your car?

Don’t put the lights on the tree! Put them on the dish rack, in and out of the plates, cups and saucers and wind them though the silverware. Take them in the bathroom and lace them around the toilet, especially the ones that blink off and on, you know those cute little tinkling lights....

Instead of cookies, have your guests make little cement patties with their handprints on them. When they dry, paint the fingernails red, take them outside and hang them in the real live trees.

Forget wrapping paper. Wrap the gift in a towel, diaper or drop it into a purse or a shoe. Tie it to a shovel, a birdhouse or on the branch of an orange tree.

Instead of watching out the window for Santa, let’s climb out on the roof, throw a lasso into the sky, capture the moon and drag it down through the chimney into the living room.