The Day I Painted the Ceiling of My Husbands Cadillac 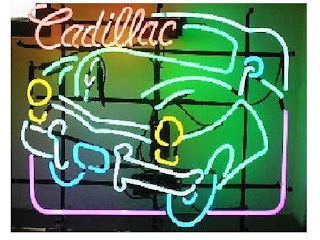 My husband Pat has twice now gone out to buy a work truck and come home with a Cadillac.
The first time it happened he left in the evening to go to a car auction. He came home in the middle of night and woke me up.
“Hey“, I asked sleepily, “Did you get a truck?”
“No, I got a Cadillac.”
“Huh?”

He was really excited about this car. We went outside and there it was in the driveway, looking brand new and light pink. It sparkled like a glass of champagne in the moonlight.
He opened the passenger door for me, and we admired the leather seats and the inlayed wood on the dashboard. “Watch this!“ He backed up several yards and opened and closed the trunk from that distance with a press on the keys. This was many years ago and quite the big deal at the time……..
The next morning we took Sweet Pinky for a drive. Grace was in kindergarten and home sick that day, so we sandwiched her in between us in the front seat. She threw up all over the dashboard about a mile into the trip and Pat pulled off his jacket to clean it up.
That car took us to many places and back home over the years. At one point, the ceiling fabric started to come loose, and hang in little billows, like a parachute, especially in the back seat. We tried pinning it up here and there, but one summer day I decided to rip it all out and replace it.
Pat told me that entire ceiling was a piece of molded plastic that was removable!
He took it out and left it on the front porch when he went to work the next day. It was like a giant upside down turtle shell. The more I considered it, the more it started looking like a blank canvas. I decided to ditch the idea of gluing fabric on it, and paint it instead! That would be so much easier.
It was such a big surface that painting it with a brush would have taken all day. Instead I squirted paint out onto a plate, and sponge painted the the whole thing. Then I dipped a brush into the paint, and flicked paint all over the ceiling shell, in many different colors. It was a happy sunny day, the music was on, and there was paint all over the ceiling, me and the porch too. I was having a wonderful time. And the ceiling was coming along quite nicely.
Suddenly it came to me that it would look good with bugs crawling all over it. I had recently carved a bunch of erasers into bugs for rubber stamping. I ran back into the house and brought out a ladybug, cockroach and spider. Instead of inking them in a stamp pad I brushed paint on them, and started stamping. To make them look like they were crawling all over the ceiling. It was quite the image….
After a while my then tween age daughters came out of the house and both looked at the ceiling shell, the paint everywhere, the crawling bugs and put their hands over their mouths.
“Mom, what are you DOING?!?” shouted the oldest.
“Dad is going to KILL YOU!” her sister chimed in.
They ripped the wind completely out of my sail. I had been so happy until they showed up. I got really defensive, and suddenly unsure of myself. “Daddy will love this.” I assured them (and myself).
“NO HE WON’T” they cried in unison.
“Yes he will love it because I did it and he loves me. He loves the way I am.” I was grasping at straws at this point and becoming more and more shaken. They had a way of throwing me off balance, because I actually listened to them. I felt like I was going to throw up.
Just then Pat pulled down the driveway. I ran out to head him off, to explain what happened, kind of pave the way for him to see it. But there was no time. He got out of the car and went straight over to the porch where the nay saying duo stood with their hands on their hips waiting for what they thought was going to happen.
Pat took one look at the ceiling, and without missing a beat, turned to me and said “Well, you just added a couple of thousand dollars value to the car.” Music to my ears! And what a relief. After it dried, he popped it back into place and that was that.
The daughters were mortified by that ceiling, even though everyone, including their friends, thought it was the coolest thing ever.
About a year later, when the odometer was past 250,000 miles, and the transmission was literally dragging in the street, I noisily pulled into a car dealership to get another car.
When it came time to determine the trade in amount, the salesman said, I really can’t give you anything for your Cadillac, but I will give you fifteen hundred dollars for that ceiling.”
“Make it two thousand and you have a deal” I answered.
He agreed, and we shook on it. I saw him few days later when I went back to the dealership to pick up the B that was missing off the Buick I bought there. He told me the Caddy had gone to a junk yard, and the ceiling was nailed to his living room wall.
(The neon image above is of a sign that is for sale that was on Google images. Click on the image
to find out more about it. I have no idea what company this is but they have lots of cool things for sale that light up.)
http://www.artypantz.blogspot.com/
Posted by Artist Victoria O'Neill at Thursday, February 19, 2009

did he REALLY say that? the guy at the dealership...? did he really pay you!

He took two thousand dollars off the price of the Buick....that was the trade in value.

LOL, that is a cool story.