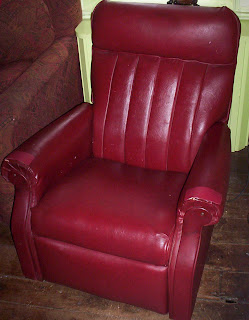 I set out yesterday to find a red leather recliner as a Valentines gift for my husband, and hit the jackpot. I went on craigslist and found a vintage one. It's electric and you actually plug it into the wall! I emailed the owner, and she (Kim) called shortly thereafter. "It was my father's chair" she told me. Good! I like a piece of furniture with some history to it. I went to pick it up. It was 60 bucks.

Kim and her husband were carrying it out of the house and into the driveway when I pulled up the hill to their house. I hopped out of the car with jubilation and then stopped short when I realized that it was a bit beat up, most specifically torn on one of the arm rests. "Are you sure that this thing is actually leather?" I asked kind of dubiously since it wasn't clear......
"Oh Daddy would have only had a leather recliner, I can assure you of that" she assured me of that.
Ever the optimist, and handy with a needle and thread, I looked at the rips and said "Oh well, I'll just make some of those sleeve covers!" Kim's husband agreed, as if it would be a piece of cake to make them.
So they handed me this old contraption of cables and a box with the knobs missing, that went with the chair. Then they picked the Electric Valentine up and shoved it into the back of my Honda Element, a vehicle I love so much I should go work for the company selling them.
It all happened so fast. I peeled off three 20 dollar bills, handed it over to Kim, thanked them, got into the drivers seat, backed up and rolled down the driveway.
The E. Valentine slid forward and stopped short at the back of the front seats when I came to the bottom of the driveway. I turned around and looked at it, and had this sinking feeling that I had just bought a naugahyde chair with glaring rips in the arm for my husband - who has pretty much rolled his eyes at every stray Tom Dick or Harry piece of furniture I've ever dragged home, and there have been plenty over the years.

Pat sees used furniture so differently than I do! I'm starry eyed at anything that is handmade, or unique, has beautiful fabric, etc. Pat gently points out that all the springs on the couch have sprung, or the table is missing the pieces to hold the legs on, or the chair has a big crack in the back leg.........
I remember the first date I ever had with him. We were driving down the street and somebody had put out a bunch of trash. I spied some old fashioned doll beds pushed up against a garbage can. "Stop, I want those!" I yelled and he looked at me like I was crazy.
"They're in the trash!" he stated firmly as he stepped on the gas, as though once in the trash always in the trash. "You don't take things out of the trash." Ha! He also told me, in those early courting days, that he didn't eat anything that looks like s___ when I offered refried beans to him.......My how things have changed over the years.
Anyway, I drove straight to the fabric store and bought some 95% matching vinyl to make the sleeves for the arms.
When I got home I left the chair in the car, put a plastic table cloth over it to keep it hidden, and made sure to lock the doors so nobody would steal it. (just kidding!)
This morning my daughter and I carried the Electric Valentine into the house, stopping every now and then to laugh hysterically for one reason or another. Fortunately since it has to be plugged in to work, at least it didn't open up on us as we wrestled it through the front door, threw it on it's side to wiggle it back and forth, through the space between the hall and living room. We finally got it into the living room and into a corner. I plugged the cables into the two plugs holes in the back of the chair, and plugged the third one into the wall.
I sat down in it, found and hit the switch. The engine sprang to life instantly. It works! and sounds like a rickety old train driving through the livingroom, but that should be OK because Pat works for Amtrak, and accustomed to such noises. Down it went! It reclined like a champ, practically goes completely horizontal and then some, and is the most comfortable thing in the world. Bingo!
However it became immediately evident that the arm covers idea would not work, because the seat comes up, when reclining and would just push them off. So I moved to plan B and made a little patch and glued it on top of the tear. And then did one on the other arm to make it look like that's the way it's supposed to be...........ha!
Now I am just waiting for Pat to come home so I can give it to him..........Happy Valentines Day!
http://www.artypantz.blogspot.com/

LOL, What a great and thoughtful present. Thanks for visiting my blog and yes that is amazing that you met someone with the same condition. I still talk a little but very soft. The most frustrating are those voice prompt phone systems that do not pick up my reply and don't give me an option to press a number instead. GRRRR Always have to have someone else make those calls for me till they get a real person on the phone.
Happy Valentine and Hugs to you.
Maria

BTY I found your blog through my good friend Mary's blog at WCdish.