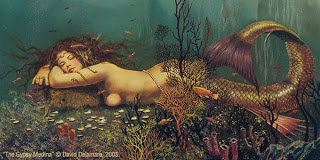 When I was a kid my father’s solution to whatever ailed us was to go take a bath. It always worked. So loving the water is a genetic thing for me. I love the bathtub and here are some things I do in there besides get clean:
Read, as in an entire book in one bath
Floss teeth
Listen to relaxation tapes
Talk on the phone.
Dine
My father is a real bath lover, quite the merman and a champion swimmer. He taught all of us, including my mother, how to swim and body surf.
One day in the seventh grade, we had just moved into a small town and gone down to the “dam” where everyone hung out in the summertime. It was a big, long and deep cement swimming spot and there were lots of people there. There was a steep cement wall on the one side of the dam with a sandy beach. The other side was woods. There was a long rope swing tied onto a huge tree branch in those woods that kids lined up for. They took turns flying out on the end of the rope and letting go to drop into the water.
The water was so deep and such dark blue that it was black. I stood there on the edge afraid to go in. There were no steps. My father dove off the side with no hesitation and flew into the water like Superman. He hit the surface with barely a splash and then swam down the length of the damn, so fast and full of grace that everyone, including me, stood mesmerized.
I spent many fantastic hours and hours body surfing and laughing with my dad in the Pacific Ocean. We didn't need no stinking air mattresses. It was just us and the waves, sun, sand and seagulls.
When Dad was in his late 60’s he used to take treacherous hikes to a river that was too cold for me and my siblings. He happily and effortlessly jumped right off the cliff into the freezing water without a flinch, while we watched in amazement. My mother has a priceless photograph of him from that time, taking a bath out in the middle of the woods in a claw foot bathtub.
My dad’s swimming days are kind of over since he had a stroke about ten years ago and became paralyzed on one side.. ……it’s a loss I cannot even imagine. He has to be in some kind of a place with a lift to get in and out of a tub or a pool, so it hardly ever happens. The worst part is that he can’t go into the ocean anymore because the water has to be at a therapeutic temperature.
One of my daughters was born a mermaid. When she was two years old I had her in a swimming pool and she just kept fighting me to let go of her. My friend said “Just let her go. Once she realizes that she’ll drown she’ll stop fighting you.”
So I let her go, she sunk to the bottom, I waiting a nanosecond, then pulled her up. When she hit the surface she gasped, choked and threw up buckets of water. As soon as she caught her breath she smiled at me and shouted “Again!” She’s now 18 and loves the bathtub too.
My other daughter just turned 21 and she has an exquisite, detailed black line drawing inspired by artist David Delmares mermaid image above, tatooed across her lower back, which is quite spectacular.
http://www.artypantz.blogspot.com/
Posted by Artist Victoria O'Neill at Friday, April 10, 2009

That mermaid is spectacular and must make an aswesome tattoo.
Nice stories about your father, Victoria. How sad that he's been "grounded."

love, love, love david delamare!! i am waiting to have some extra cash to get some prints...would love to ssee a photo of her tattoo

I also love the water, my mother always said that "I could swim, before I could walk!"

Relaxing in the tub on a cold winter night is what I love.

The mermaid painting is gorgeous! So is your story...very interesting:)

what a delight your posts are, thanks for your visit too. will be back.

Thanks for your comment on my blog and good luck with your workspace. :) I'll have a nice big one eventually!
I miss being able to take a bath in a tub. I lived in the campus dorms the entire time I was at school and only one dorm i lived in had bathtubs. And now where I live with the boyfriend (and always stayed during summer and winter breaks) there's only a shower. I've not been able to lay in a warm bath for about four years! :( staying at a friends all next week though and totally taking advantage of her tub, haha.

Victoria,Thank you so much...BTW the name Victoria is very dear to me..its the name of the college I was in..(I am still stuck there!!!)

What a wonderful family story! Thank you.