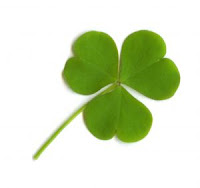 When our son was in second grade, his teacher called to share a cute thing he had said in class that day. They were discussing ancestry and going around in a circle saying what their cultural and ethnic heritage was. When it was Shea’s turn he said “I’m half Irish” and then after some consideration “and half artist.”
A few weeks ago my niece was over for dinner with her four year old bundle of cuteness and curiosity son. Her last name is O’Neill since she is my husband’s brother’s daughter.
They were sitting in the living room and the subject of Irishness came up. My husband declared that he was 100% Irish. My niece said “Well, I’m half Irish.”
Her son stopped flying the toy plane around the room, that he was holding in his hand, and looked at her with giant, incredulous eyes.
“You’re half Irish?” he asked excitedly.
“Yes I am!”
And then he gushed “Does that mean I can celebrate Hanukah with you?” 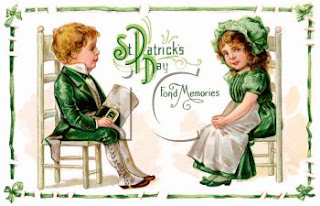 LOL! Kids really can come up with zingers!

On a Whimsey said...

Out of the mouths of Babes!! Cute!

How cute!!!! Hope your family enjoyed St. Patrick's Day...I have some Scottish, Irish waaaaay on back in my ancestry.

LOL, kids say the neatest things. I had a three part St Patty's Party, that's still running, me being 31% Irish. Thanks for sharing the kid's comments.