I have been busy remaking all the capelets for my most recent interactive theatrical storytelling event,
Come Join the Rainbow.
The first show of the season is coming up next month.

I saw an interesting looking rainbow women's costume the other day while looking on ebay for a rainbow scarf to wear during the performances, and thought it would be fun to have it to give to a teacher to wear during the show. Kids always get a kick out of seeing their teachers dress up in funny costumes.

It just so happened that an online store and I were on the psychic hotline because that very day I recieved an email asking if I'd review any product they had, in exchange for them sending it to me. It was a costume store! I was tempted by some of the other stuff they had such as a fog machine, but came upon that very same costume I wanted! 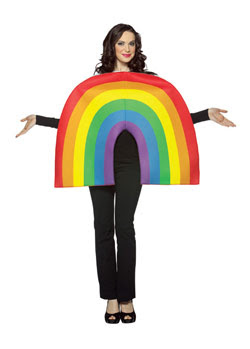 It's actually called a Unisex Adult Rainbow Costume, although I can't really imagine a guy parading around in this. Oh wait, maybe I can......Haha!

Anyway, it's a bit wrinkled from being folded, stuffed into a bag and then mailed in an envelope, so I'm trying to steam those wrinkles out according to the directions that came in the package.

After trying it on once the neck seam came out a bit. It's going to get a lot of use so I reinforced the neck edge with extra sewing, and now good to go.

It may be more comfortable, hold it's shape and look  interesting to wear it on your back but haven't tried that yet.

I like it because it's nice and lightweight so will be easy to transport.

There's always at least one adult wherever I go who is a ham so will have no trouble getting somebody to put this thing on. It would be sweet to have them leave the room and then come in at the end with some kind of Ta Da moment.

They could be holding up the giant painted cardboard smiling faced sun that ends every ArtyPantz story, and shout out the words that go along with it "And then the sun came out and everyone was SO, SO happy!"

hopefully it will be at the Phoenixville Library when I get the grant!

Your post was interesting and I find it fantastic. I really like it. Thank you for sharing.