Shea at the Phoenixville Blues Festival 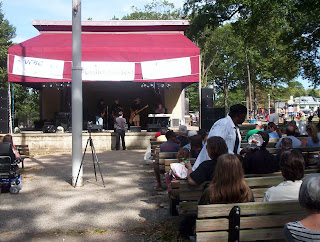 The first time I ever went into a museum, I immediately sensed that these were my people, and identified myself as an artist from then on.

My son Shea has known this about himself as a musician since the day he was born. Always asking "What's that sound?" No matter where we go, he follows the music and immerses himself into it. When he was three years old we went to the petting zoo, and while the other kids were petting, Shea was laying on the ground by the barn with his ear ON a small boom box listening to Old MacDonald Had a Farm. The first time he heard African drummers was at the age of four, and he walked right into them and sat down next to one of them, who looked right at him and handed him a drum. I once lost him at a party when he was about six, only to find him out in the back with the band, in their van.

So it came as no surprise to find him at the Phoenixville Blues Festival yesterday standing right in front of the stage.

And sure enough, he eventually wound up on stage! Just happened to have a harmonica in his pocket. Haha! 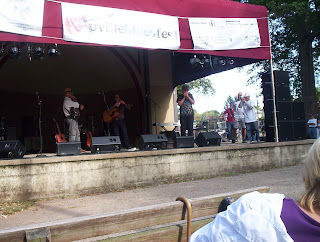 Oh, I saw him! I thought he was with the band. :) That's great that he ended up playing with them.