Love for One Another as a Foundation for Government 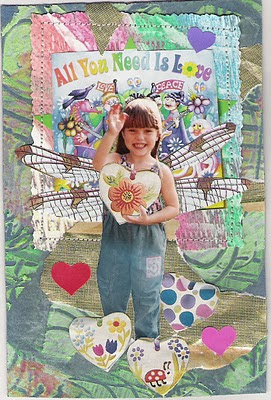 Are Democrats and Republicans really parties of the people? No, they are actually slumber parties. Both staying up all night talking, not getting anything done.


The world is changing at such a rapid pace, innovation is everywhere, so why not in the government? We're running around in circles. Everybody is down on the government, and that's a good thing. Because we clearly need a new system for how to live together on this planet. I really see something dramatically different in our future. How about a system based on love for one another? Why not? It's really age (the one we live in now) appropriate.

The seesaw is way off on one side. The extremes of poverty and wealth are more extreme than ever. The world is owned by corporations! So is the media. It's so hard to find out what the truth is and make an informed decision about anything these days. Infomation has been replaced by agendas.

I don't qualify for a traditional small business loan because, well the not so funny but true answer is that I can't afford it. This follows the same wierd logic that makes poor people pay higher interest rates, and keeps many people from being able to buy a house just because they don't have a large down payment. These same people work just as hard as anybody else, and make monthly rent payments in the same amount as mortgage payments!

What would have happened if all that money given for corporate bail outs was given to citizens!
Bail us out of credit card debt, college loans, fuel bills, etc. Give me a bonus for being a good parent and citizen.
I wish the government had done nothing and let the whole economy crash, land on it's face then get up again, wipe off the giant nose bleed, and start from scratch, minus the swagger.
Something major has got to shift. The answers may be simplistic, but as an artist I know that the simpler the design, generally speaking, the better quality. When things are simple there is nothing to hide behind or within.
So simply put, if each person recognized the FACT of our interconnectedness, and internalized the concept of the oneness of humankind we would at least be pointing ourselves in a forward facing direction. This whole us against them gridlock in the world is really getting old. Wake up and smell today's coffee!
We're all in this together, aren't we?

I totally agree. If nothing else the bailout money that went to the banks should have gone to the homeowners whose underwater mortgages and foreclosures were one of the main causes of the whole meltdown. "Too big to fail" seems to me to be a very dangerous concept that should never have been taken into consideration. The big greedy corporations that caused the mess in the first place and were bailed out (thus not having to face the true consequences of their actions) are now the same ones that are giving huge bonuses to their high level employees while at the same time raising interest rates on their customers. In the end they haven't learned anything, except that the government will save them if they do anything too stupid.

Ruth thanks for stopping by. Your words are So true!