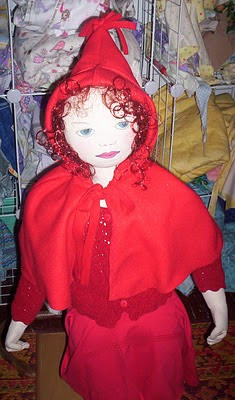 I'm happily holed up in my studio making cute little rainbow pixie capelet costumes for a new interactive theatrical storytelling event called "Come Join the Rainbow", a sweet and adorable story for preschoolers. I'm making 12 each of the six colors of the rainbow.....
Today is red.

This will be the fifth! in an ever growing series of interactive shows created to bring people together through the arts.
Each child will choose the color pixie they would like to be. They'll sing a call and response song and wave colored wands to make themselves into a large living rainbow. So cute! I can see it as clear as a bell. Can you?
Just as I am writing this now it's becoming clear that this story would really lend itself so beautifully to being photographed in action and made into a children's book. Time to call Bridget Armbrust Photography and get her on board! She took the pictures for the WrapADoodle website and did such a wonderful job.
Anyway, back to earth and the actual show, after the kids make the human rainbow, they'll go back to their classrooms and create a little accordion rainbow book to keep and take home. That can be part of the book too, directions for how to make the little rainbow book!
Come Join the Rainbow will be ready for booking by April 1st.
I have gotten so much use out of the mannequin above! It came without a face, so that was added pronto because it was creepy being stared at by a face with no eyes. It is about the size of an average four year old. The pixie capelets are made of fleece so they will stretch or not to fit the tiniest to the chunkiest....haha!

This is looking really nice. I love you model.

Glad you received the drawing and that you are pleased with it.