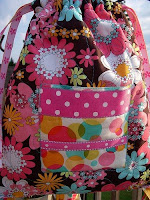 Here's a look at a cute little back pack purse from GrusselDesigns01
What a nice seller, so communicative and accomodating.
And hey, just realized that it matches the blog!

I bought this to take a small backpack, instead of a purse, along with my other backpack for the solo trip I'm taking to Vermont next week to spend a couple of days with one of my very best friends. It's a nine hour train ride to and fro with fun in between that I am really looking forward to. My husband works for Amtrak so I have a train pass which means we get tickets for free.

I once took a three day train trip from Philadelphia to California in the middle of the summer with two of my kids when they were age 3 and an infant......As I planned the trip people kept telling me how crazy it was to take two small children on such a long journey. My feeling was that people used to take that trip in covered wagons with their kids. I had plenty of food, toys, games, art supplies and a credit card for goodness sake.

When the train pulled out of the station in Philadelphia I had a last minute full body adreneline rush and thought to myself "Are you out of your mind?"

But it was a wonderful trip. Traveling has always been a magical experience, and it was no different with my beautiful daughters along. It was easy and everyone was so kind and helpful to us. All the kids on the train came and sat/played with us. We made friends with everyone on the train.

And it was alot of fun on the way back too.......except for one unbelievable and funny now, but not funny then, hitch. We decided to change the route on the way back for different scenery so I had to go to the booth at the station to adjust the tickets.

Imagine my surprise when the ticket issuer called me Susan. He looked on the computer and told me that my husbands wife was Susan. I explained that they were long divorced......that she was a lovely person but that I was his wife NOW and my children were his children. "They look just like him!" I implored as I held them up to the window.

Instead of making me PAY for the tickets, since I was clearly an imposter, he was so gracious and actually called Amtrak in Philadelphia for us. We spoke to someone in charge who just happened to know my husband, and knew that his wife's name was Victoria. Can you believe this?

It seems that my dear sweet husband had forgotten to change the name of his wife in the personell office from Susan's to mine, even though we had been married for about six years by then. You can imagine the tone of my voice when I called HIM later.........

Oh MAN I would have been steamed! I hope you got nice "honey I'm sorry" gift when you came home! Sounds like a great trip otherwise.

FUNNY STORY!!!
Good to hear from you- I am afraid I stayed away for a bit because for a while, whenever I clicked on your site, blank pages would come up which would freak me out. I have no idea what caused that- it happened once before with someone else's blog, too. All is good here today!
I will continue to enjoy your blog now!
Have a great trip!
jenny

I would actually love to travel like that with my 2 girls.. I have always loved train rides since I was a little girl and I bet my girls would love them too.

That was such a funny story about your husband not changing the name...but, Yes - I am sure it wasn't very funny at the time, LOL!