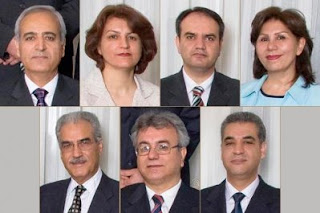 We tend to take religious freedom for granted in the United States. But peace loving, unity promoting, law abiding citizens of Iran who belong to the Baha'i Faith face daily and sometimes deadly persecution by the Iranian government.
Please join me and other concerned people around the world in support of the 7 Iranian Baha'is who are being detained illegally in Iran for believing in the following principles.

• The oneness of mankind.
• Universal peace upheld by a world government.
• Independent investigation of truth.
• The common foundation of all religions.
• The essential harmony of science and religion.
• Equality of men and women.
• Elimination of prejudice of all kinds.
• Universal compulsory education.
• A spiritual solution to economic problems.
• A universal auxiliary language.
Yesterday marked the one-year anniversary of the arrest and imprisonment of six of the seven members of the "Friends in Iran." Their situation remains precarious. Recently their families were informed of a new and fourth accusation lodged against them by the government, that of "spreading corruption on earth." This charge carries the threat of death under the penal code of the Islamic Republic of Iran. The other accusations are "espionage for Israel, insulting religious sanctity's and propaganda against the Islamic Republic
The allegations are ridiculous and fictitious. These seven Baha'i leaders have now spent a year imprisoned without formal court charges and without any access to their lawyer!
To learn about the individuals who are being held, and to view their profiles, please click here http://news.bahai.org/story/695 You will learn that they are law abiding, hardworking citizens, who seek nothing more than to help make a better world for all of us.
The extent to which Bahai's are persecuted in Iran is heartbreaking. This current situation is an awful and ugly sequel to many other atrocities against Baha'is in Iran. I personally know and love several exceptionally intelligent, loving and accomplished people whose family members have been murdered by the Iranian government simply because they are Baha'is. It brings tears to my eyes to think about it.
Fortunately, the worldwide community, including governments, parliamentary leaders and human rights organizations are watching and admonishing this dire situation. You can too, by learning more about it, and contacting your local representatives to ask for the immediate release of these individuals.
On February 13, the U.S. House of Representatives introduced a resolution, H. Res. 175, "Condemning the Government of Iran for its state-sponsored persecution of its Baha'i minority and its continued violation of the International Covenants on Human Rights."
There are now two resolutions-H. Res. 175 and S. Res. 71-currently before both the U.S. House of Representatives and the Senate calling for the release of the Iranian Baha'i leaders and other Baha'i prisoners.
Please contact your representatives and ask them to co-sponsors the resolutions. To find out who your representative is and how to contact them go to http://www.congress.org/congressorg/dbq/officials/ 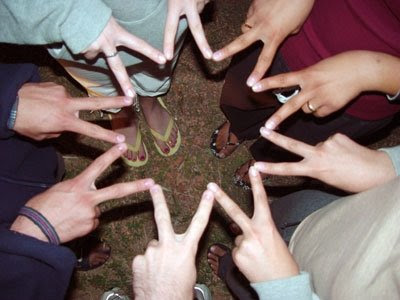 Founded more than a century and a half ago, the Bahá'í Faith has spread around the globe. Members of the Bahá'í Faith live in more than 100,000 localities and come from nearly every nation, religion, ethnic group, culture, profession, and social or economic background. Bahá'ís believe the crucial need facing humanity is to find a unifying vision of the nature and purpose of life and of the future of society. Such a vision unfolds in the writings of Bahá'u'lláh, the Prophet/Founder of the Baha'i Faith, who Baha'is believe is the Messenger from God for this day and age.
The Baha'i Faith does not replace other religions, it is a continuum of them. The Baha'i Faith recognizes the Prophets of all the major religions as being Divine messengers from the same source of Truth, God. To be a Baha'i is to believe in the Oneness of God and the Oneness of Humanity.
I became a Baha'i in 1996 and it was absolutely the best life decision I ever made.
To learn more about this wonderful religion visit the Official Website of the International Baha'i Community at http://www.bahai.org/
http://www.artypantz.blogspot.com/
Posted by Artist Victoria O'Neill at Friday, May 15, 2009