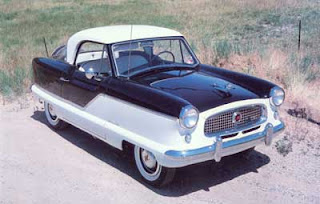 Last night while having dinner with a group of friends, we laughed till we cried talking about how things used to be. A few of us grew up poor and reminisced about that aspect of the past, a topic always good for the guffaw. Much of the conversation revolved around cars.

We all had cars at one time or another that wouldn’t start by just getting in and turning on the key. You had to park the car on a hill, making sure there were no cars in front of you right now, and no chance of a car ever being in front of you, and yank the emergency brake, if it worked. If not then you had to turn the wheels to the curb or put bricks in front of the tires. When it was time to go anywhere, you’d get into the car, shift into neutral, roll down the hill and pop the clutch at just the right moment to get it started. The car would hopefully sputter to life.....
Sometimes that rolling down the hill method was unsuccessful, and there you were at the bottom of the hill, stalled. So you’d have to ask the irritated people in the other cars, wanting you to get your crappy car out of their way, to push the car. You’d be out there pushing too, with the driver's door open and one of your hands in the car, on the steering wheel, trying desperately to keep it from smashing into any parked cars or innocent bystanders, and off of the sidewalk.
When the car gained some momentum, you’d awkwardly, frantically jump in, shut the door while trying to keep steering, and get your feet into place to pop the clutch. All in a matter of two seconds. Hooray! You’d wave your hand out the window shouting “Thank you!” to the pushers as the car sprang to life and you zoomed off. This whole scenario happened several times per day.
I remember my first car. It was a Nash Metropolitan, one of those little black and white cars that should have looked like a cute skunk as in the picture above, but didn't. There was no paint on mine so it was grey with big rust spots all over it. I was 16 and it cost forty bucks. They wanted fifty but I took one look at it parked out in a field and brought the price down on the spot.
My dear boyfriend at the time, who taught me how to drive, graciously came along to help. He brought his tools, just in case. The entire inside of that car was brown rust, squirrels had obviously been living in it and the seats had frayed towels covering them. Both of the doors had to be tied shut from the inside. The rope for that was included in the price.
My boyfriend was dubious about the whole transaction, but it was love at first sight for me. While we drove down the hill, away from the waving family who sold it to us, the steering wheel actually came off in his hands, which made me, not him, laugh so hard. Thank goodness for those tools. He nailed a stick to the steering column and drove it home that way! What a good sport he was.
I scored my second car, this time a little Simca for thirty five bucks. It had a blown head gasket, whatever that means. The only problem with that car is that it would not turn to the right. So it required a lot of driving around in circles and fancy maneuvering to travel anywhere. The rearview mirror fell off one day for no good reason. That was before super glue or gorilla glue, so I just kept it between the driver and passenger seats and held it up when needed.
But the car that takes the cake is the old Cadillac convertible that my father dragged out of some junkyard one fine day. He shot up the driveway honking the horn and we all ran out, piled in and took a swing around the neighborhood. When we got back home, he pushed a button to show off the convertible top.
At first nothing happened. And then nothing happened. ...... Just when we rolled our eyes and thought it wasn’t really a convertible after all we heard a creak and a groan overhead. Dust flew and a musty smell filled the car as the ceiling pulled away from the top of the windshield. It shook and arched slowly, slowly ever so slowly into the air and then slid, shuddering, back into a mysterious slot somewhere in the rear of the car, and never came back up again. Another quirky feature was that those fancy high falootin pushbutton windows were stuck up - as in would not go down. So my Mom, Dad, 3 brothers, 2 sisters and I, plus sometimes a couple of friends rode around in a Cadillac convertible - with the top down and all the windows up.

Funny, funny, interesting, funny post! I didn't have any cars that match the challenges you had. Enjoyed the info today!

Victoria, I have obviously never had an interesting life on any level if yours is the measure. I laughed out loud at these stories!

Great stories about first cars!!! I can so relate. My first car was a Corvair and it used to spew oil from the rear as I drove down the road!! LOL And I didn't have to push in the clutch to put the car in gear; just step on the gas in just the right way and Varooooom!! Off she would go!! LOL
Thanks for your comments about my work and visiting my blog. I so appreciate it.
Hugs
SueAnn

I remember my first car, it was the definition of a lemon. It stalled on me so many times. I had the bumper fall off on the highway, the seat was stuck in the furthest position so only my toes touched the petal unless I sat without resting my back on the seat.

I got so frustrated that after one month, I called the tow company and begged them to take it to a scrap yard.

Thank you for the artistry. This is my first blog win and I was so happy when I found out that it was my blog that won.