Flowers of One Garden Tutorial 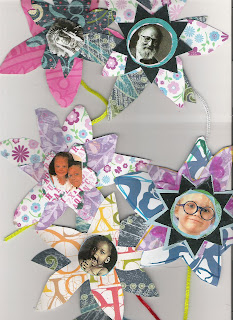 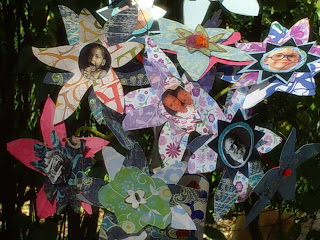 Look at these beautiful flowers, representing the Garden of Humanity that were created by a sweet group of about ten kindergartners, 1st graders and 2nd graders at Ethel Clossen Baha'i School in Chester County PA last Sunday. The idea behind the project was that we were creating a bouquet to give to an assisted living facility nearby.

How did we make them? There was some preparation beforehand, because it was a young group, and we basically had an hour together. Older kids could do more of this project themselves.
Materials: Any kind of papers including scrapbook papers, wrapping papers, pages cut from books, menus, wall paper newspapers with different languages, basically any kind of paper!
Scissors, glue sticks and extra thin pipe cleaners.
A 1/16" hole punch, alot smaller than the ones we usually use. Can be found at any craft store.
Magazines with people's faces in them.
Flower templates - make them yourselves
Flower templates are made by drawing flower shapes and a leaf shape onto a piece of card stock. I printed a few copies of them onto card stock, and cut them out for the younger kids to use as templates. Older kids could make their own templates, directly onto card stock to use. 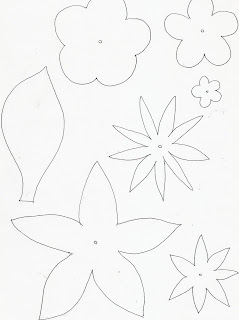 The faces were cut from magazines, using a spool of thread as a circle template. Place the spool over the head, trace around it and then cut out the head. For these younger kids, I cut out faces and glued them down and printed up a few copies on regular paper. Older kids can pick their own faces directly from magazines. The younger kids just cut the faces out from the papers I printed. 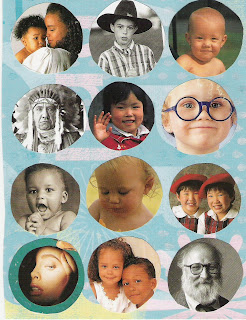 We used the the flower templates to trace the flower petals onto the assorted papers, then punched 16" holes in the centers. We threaded the flowers through the pipe cleaners, one by one, largest first then medium and then small. Once all the flower shapes were on the pipe cleaner, we bent the tip of the pipe cleaner over to keep the flowers from sliding off. Then we glued the faces, right on top of where the pipe cleaners were bent over. Leaves were added by folding them over the pipe cleaners a couple of times, at the smallest end place, and glueing into place.
The kids worked together knowing that these flowers were going to be given to the senior citizens. We spent a good deal of time talking about service, about how good it feels to make beautiful things and give them away. The kids were very excited at the thought of how happy these flowers would make people feel when they saw them.
So one by one, the garden grew, and turned into a beautiful bouquet. 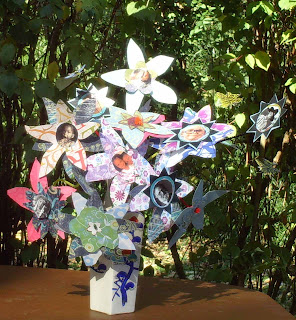 This inspired presentation represents the diverse world of humanity.
We are truely flowers of one garden.
Note: I have several books on making flowers with paper. Some of the inspiration for this project came from a delightful book
on making paper flowers by Sandra Evertson called Fanciful Paper Flowers.
I just discovered that she has a wonderful blog too!
http://sandraevertson.blogspot.com/
Posted by Artist Victoria O'Neill at Saturday, November 01, 2008

thanks for visiting my little blog today, reading comments is like opening a present, each one is different but warms your heart just the same. i love my job and i will be very sad to pass these angels on to the next teacher. last years lot were even nicer!! i am due for a bad lot, but even then i find so much to love about them it doesnt matter.
i will be back , take care and keep creating and inspiring. xx rosey

Thank you, Victoria, for this inspiring tutorial and website! It offers valuable perspectives for use in the teaching work, accessible to everyone.
I have added the site to my blogroll.
Alex
http://inspirationforbahaiteaching.wordpress.com/